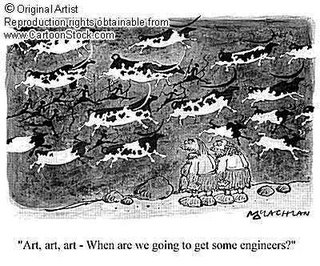 calestous_juma@harvard.edu is lookingfor politically-correct cartoons that can illustrate a talk on the role of engineering in development. Any help will be appreciated. Please pass this on to others who might be able to help as well.

“MAKE ROOM! YOU ARE NOT THE ONLY ONE IN THE WORLD!” 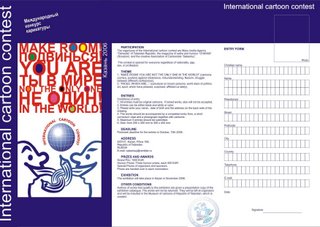 The creative Association of Cartoonists “Sabantuy” invites you to take part in a new cartoon contest:
“MAKE ROOM! YOU ARE NOT THE ONLY ONE IN THE WORLD!”

DEADLINE
Postmark deadline for the entries is October, 15th 2006.

PARTICIPATION
The organizers of the International cartoon contest are Mass media Agency “Tatmedia” of Tatarstan Republic, the magazine of satire and humour “CHAYAN” (Scorpion) and the creative Association of Cartoonists “Sabantuy”.

The contest is open to everyone regardless of nationality, age, sex, or profession.

THEME
1. “MAKE ROOM! YOU ARE NOT THE ONLY ONE IN THE WORLD!” (cartoons
(comics and posters against intolerance, misunderstanding, Nazism, struggle between different confessions/faiths).
2. “FACES, WHICH ARE...” (caricatures of known persons, world stars of politics, art and sport, which have pleased, surprised, afflicted us lately).

ENTRIES
Conditions of entry:
1. All entries must be original cartoons. Framed works will not be accepted.
2. Entries can be either black and white or color.
3. Please write your name, date of birth and the address on the back
side of the drawing.
4. The works should be accompanied by a completed entry form, a short CV and a photograph. (Please contact the organisers for an entry form).
5. Maximum 5 entries should be submitted.
6. Size: from 200 x 300 mm to 300 x 400 mm.

DEADLINE
Postmark deadline for the entries is October, 15th 2006.

PRIZES AND AWARDS
Grand Prix: 1000 EUR
Honour Prizes: Three honour prizes, each 500 EUR
Special Prizes of organizers and sponsors.
Prizes are handed over in each nomination.

EXHIBITION
The exhibition will take place in Kazan in November 2006.

OTHER CONDITIONS
Authors of works that qualify to the exhibition are given a presentation copy of the
exhibition catalogue. The works will not be returned. They will be retained by the organizers and will be included in the Museum of Cartoons of Republic of Tatarstan.
Posted by Gathara at 4:47 AM No comments:

A Danish paper publishes a cartoon that mocks Muslims.
An Iranian paper responds with a Holocaust cartoons contest -
- Now a group of Israelis announce their own anti-Semitic cartoons contest!

In the wake of the Danish Mohammed cartoons controversy, Iran’s biggest-selling newspaper, Hamshahri, in February organised a competition to find the 12 "best" cartoons about the Holocaust. The aim, according to graphics editor Farid Mortazavi, was to test out how committed Europeans were to the concept freedom of expression. "The Western papers printed these sacrilegious cartoons on the pretext of freedom of expression, so let’s see if they mean what they say and also print these Holocaust cartoons."

Not to be out done, in the same month Eyal Zusman, actor and playwrite, and Amitai Sanderovich (Sandy), a graphic artist from Tel-Aviv, Israel, organised an anti-Semitic cartoons contest- the Israeli Anti-Semitic Cartoon contest - this time drawn by Jews themselves! According to Sandy, “We’ll show the world we can do the best, sharpest, most offensive Jew hating cartoons ever published! No Iranian will beat us on our home turf!”

Now these two contests seem to have, almost predictably, run into problems. CBS News, citing AP, reports that during his visit to Iran last week, UN Secretary-General Kofi Annan raised concerns with officials over the exhibition of the Holocaust cartoons (which featured 204 entries from Iran and other countries including the USA, Turkey and Indonesia) at Tehran's Caricature House. with . According to his spokesman Ahmad Fawzi, Annan brought up the exhibit, which runs till Sept. 13, in talks with Foreign Minister Manouchehr Mottaki. "We should avoid anything that incites hatred". The U.N. chief had not seen the Holocaust cartoons but "from what he heard, he would find them pretty distasteful, as he did the Danish cartoons about the Prophet Muhammad, which he strongly condemned at the time," Fawzi said.

Sandy also writes that the Tel-Aviv Comics, Caricatures and Animation festival which ended last week and which had initially offered to include Zusman and Sandy's exhibition, withdrew the offer "due to content." Gavriel Fiske of the Jerusalem Post reports that one of the judges for the Israeli Anti-Semitic Cartoon contest, Pullitzer Prize winner Art Spiegleman found the cartoons "as blood-curdling as the contest literally asked for, but if one erases the Jewish names below the cartoons they pretty much just reinforce the stereotypes they mock." The cartoons can still be viewed on the official site gallery.

According to Moshe Goralli, writing in Haaretz, the festival however included a special session - entitled "God on the Line" - that focused on the question of whether it is permissible to laugh at God or at least include him in caricatures. It also featured an exhibition of Israeli cartoons on the recent Israel-Hizbolla conflict. According to Reuters, depictions of the Hizbollah leader, Hassan Nasrallah, ranged from him using children as human shields to biting the boot of an Israeli soldier and disputing Lebanese territory with Israel's military over a map of the region.

While much of the artwork was directed at Nasrallah, the cartoonists also took swipes at Israeli military leaders. An Israeli boy who came to see the exhibit said one of the cartoons summed it up for him. It depicted Israeli and Lebanese soldiers both with their pants down trying to see who had the bigger "rocket". Festival director Nissim Hizkiyahu said: "We asked the cartoonists to give their point of view, their special point of view, about this war and they gave us special comics and cartoons about the events, not only about Hassan Nasrallah, but around the war and how the people reacted to this war."

Posted by Gathara at 4:36 AM No comments:

African Women’s Development and Communication Network(FEMNET) in partnership with the Association of East African Cartoonists (KATUNI) are organising a cartoon exhibition and competition to mark the Nairobi+21 Conference which is to be held in October. FEMNET in partnership with KATUNI aims to promote an appreciation of cartoons as communication tools for awareness creation and generation of debate on gender issues.

What is Nairobi +21?
21 years ago, the first international women’s conference in Africa was held in Nairobi, Kenya. The Conference for the first time afforded women of the South an opportunity to organise and influence international commitments on women. The result of the Conference was the Nairobi Forward Looking Strategies (NFLS) that later informed the Beijing Platform for
Action (BPFA).

Nairobi +21 initiative offers an opportunity to reflect on achievements and what has changed for women over the last two decades. It also hopes to invigorate debate around gender issues on the continent, hold governments accountable for the obligations they undertook on behalf of women and enable the youth identify with the goals of the NFLS and BPFA. For more information on Nairobi +21 click here.

Exhibition Theme: Reflections on Nairobi +21
Cartoons should focus on the main themes of NFLS - equality, development and peace. Cartoonists are free to pick on a sub-theme of their choice from employment, health, education, communications, science and technology, and environment. Creativity from the
cartoonists is encouraged in the interpretation of the exhibition theme.
Cartoonists can submit work that highlights their impressions of achievements and what has changed for women over the last 21 years. Caricatures of prominent women leaders in Africa and women leaders at community level can also be submitted. Entries from women cartoonists are encouraged.

Artworks may also be sent via email to
katuni@gmail.com

The new deadline for receiving artworks is 30th September, 2006

The Prize
The top prize is a year’s subscription to FEMNET (membership entitles you to receive FEMNET
publications, e-newsletters, and participation in the General Assembly), the chance to be a guest cartoonist for FEMNET publications with a regional reach, and a bonus cash prize of Kshs. 1,500

The first and second runner up will receive cash prize of Kshs. 1,000 and Kshs. 500 respectively.

All winners will have their work featured on the FEMNET website.

Judges
The public attending the Nairobi +21 Conference on July 28, 2006 will be invited to pick the winning entries. Voting will be by secret ballot. The cartoonist that receives most votes, wins. Voting will be based on work that contributes to promoting non-discrimination, diversity, and equality of women and men.

FEMNET reserves the right to use all material submitted for the exhibition in any way and media, and to reproduce it for purposes of its work on women’s rights, gender and development.
Posted by Gathara at 10:56 AM No comments: 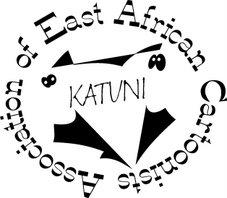